This article first appeared in The Bakersfield Californian

When Canyon Hills Assembly of God Pastor Wendell Vinson first envisioned CityServe, he believed it could be a way for churches across the country to band together to better provide aid to those in need.

But there was no way he, along with co-founder Dave Donaldson, could have imagined how quickly their brainchild would take off.

Started in 2017, CityServe found itself at the right place to make a big difference when the coronavirus pandemic shuttered businesses and caused millions to go unemployed. 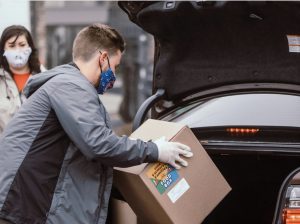 What began with one warehouse in Bakersfield has exploded across the country. The churches organized under CityServe have distributed $588 million worth of resources to those in need, and involved hundreds, if not thousands, of churches. More than 35 million people have been served through the program, according to its website. With an ever-growing list of contributors and volunteers, the organization is now looking to take its model international.

“Every day I’m in this place going, ‘Wow, this is hard to imagine that this is happening,’” said Vinson, who first discussed what would become CityServe with Donaldson in the early ’90s “It’s been a profoundly powerful thing to see people of good will work together across this country.” 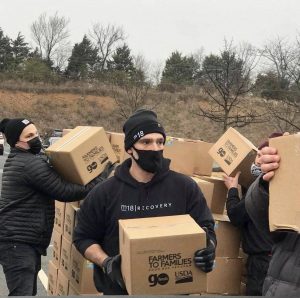 The idea behind CityServe is simple. It is a decentralized network of churches, which distribute food and other necessities to their respective communities. Its leaders say local churches can reach more people and provide a more personal connection than traditional food banks.

“All of these other organizations and food banks are needed, but they can’t make those personal connections and sustain the way a church can,” said CityServe spokeswoman Crissy Sanchez-Cochran.

It’s success has partly been a result of CityServe being in the right place at the right time. The U.S. Department of Agriculture’s Farmers to Families Food Box program, which has supplied more than $6 billions worth of food to Americans, utilized the CityServe network to reach individuals in the “last mile of need.”

Defined as those who cannot reach traditional food distribution points either because they are homebound or do not have access to transportation, CityServe believes local churches are in a prime position to help those who have fallen through the cracks.

Members of the Trump Administration worked with CityServe during the pandemic. Former President Donald Trump’s daughter and adviser, Ivanka Trump, personally took part in CityServe events, and helped direct the USDA toward the organization.

“It’s truly extraordinary the scale of what was put together and how quickly it came together,” she told CityServe leaders during a virtual event in January. “The federal government is not known to be very nimble and this is one of the great examples that counters that stereotype.”

As vaccinations begin to become more widely available, CityServe has begun to look toward a life after COVID-19. Still, Vinson said he can’t help but feel proud of how the country responded to the crisis.